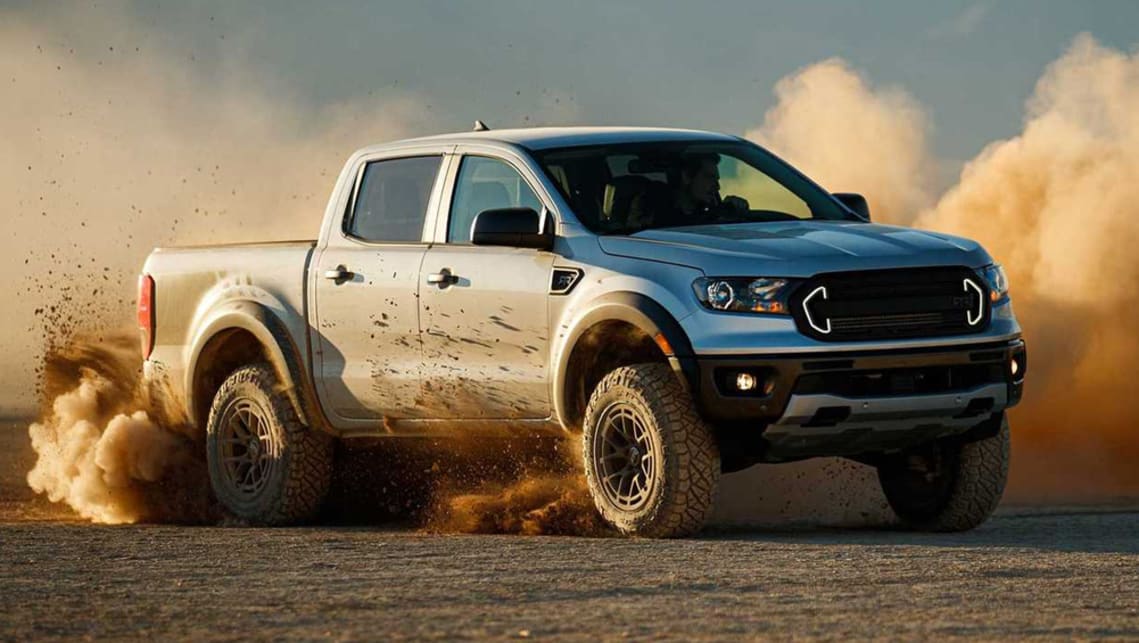 The annual SEMA Show is the Willy Wonka Chocolate Factory of cars. If it’s weird and wonderful – it is on display in Las Vegas in November.

Ford has the biggest display this year, featuring 50 custom-built cars including six mind-blowing Rangers. The Aussie-developed dual-cab has been given the treatment by six leading mod shops in the US to create some of the wildest iterations of the ute yet.

Even amongst 50 Fords, the bright yellow Tjin Edition Ranger will stand out from the crowd. While most of their colleagues have accentuated the off-road ability of the Ranger, father and son designers, Neil and Collin Tjin opted for a lower and wider stance.

Using air suspension they lowered the front end by eight-inches and the rear by nine-inches to create a tougher look. The wheel arches have been flared to fit custom 20-inch wheels and wider tyres.

Under the bonnet is an upgraded version of the US-only 2.3-litre EcoBoost engine, with a Roush Performance intake and Ford Performance cat-back exhaust.

While most Rangers sport a lift kit Neil and Collin Tjin have done the opposite, lowering their and widening their Ranger.

The rest of the Rangers on display went down the more predictable – but no less impressive – path of upgrading the ute for off-road adventures.

In fact, the Ford Performance Parts Ranger, Hellwing Ranger and RTR Rambler Ranger all feature tents mounted above the tray to turn the dual-cab into a go-anywhere hotel.

The RTR Rambler is a particular highlight, with its Raptor-inspired Fox tuned suspension by Ford Performance, underbody protection and custom RTR wheel arches and 33-inch off-roading tyres it should go well off the beaten path.

The Yakima Ranger avoided the camping motif in favour of action sports, featuring a kayak mount and a rack for four mountain bikes, along with the Fox shocks, new bumper and bigger wheels and tyres.

The RTR Rambler is a particular highlight, with its Raptor-inspired Fox tuned suspension by Ford Performance

The final Ranger at SEMA is the Advanced Accessory Concepts version, which has taken an XLT model and thrown a catalogue of accessories at it. There are new bumpers, skid plate, rock sliders, Ford Performance rear differential cover and an aluminium tray bed with canopy.

Of course, with 50 cars on display it won’t be just Rangers Ford is showing off. Even the Transit van has been included in on the action. Local racing school, SpeedVegas, has turned a humble Transit into the ultimate mini-bus. Custom wrapped and lowered five-inches, it rides on Weld Racing wheels and features Momo seats inside it looks suitably sporty – at least for a van.

As cool as that it, the Polvoorde Racing Transit is arguably more impressive. That because it no longer has wheels, instead the off-road racing team has added tracks at each corner to ensure it can conquer any terrain.