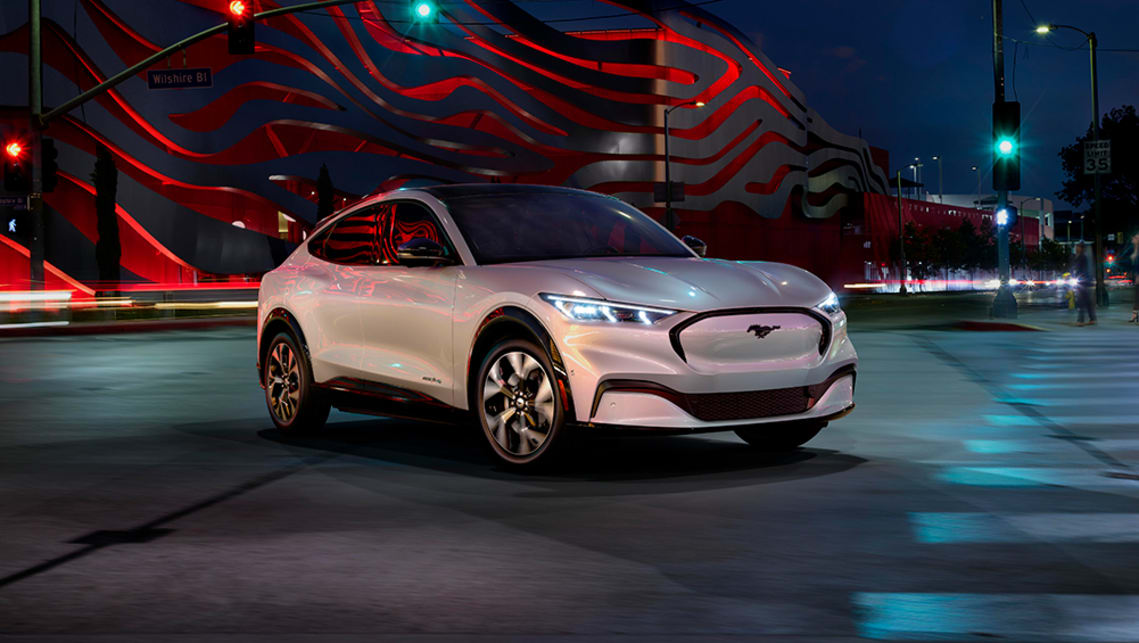 After accidentally publishing images and details of its first all-electric SUV last week, Ford has officially revealed the divisive Mustang Mach-E that will target the European and North American markets from late next year.

The Blue Oval’s Australian arm told CarsGuide that the Mustang Mach-E “marks a significant milestone in the future of Ford products and the company’s electrification strategy”, but it was unable to comment on its local prospects, noting that it will start its own “electrification journey with the Escape PHEV next year”.

While the use of the Mustang nameplate on an SUV may be a sticking point for some enthusiasts, lovers of high-performance vehicles are unlikely to be disappointed by the Mach-E’s GT 342kW/830Nm Performance Edition flagship, which blitzes the 0-97km/h (0-60mph) sprint “in the mid-three-second range” – a result Ford says is comparable to that of the 331kW/550Nm Porsche 911 GTS.

Comparatively, the perennial all-electric SUV, Tesla’s Model X, reaches 100km/h from a standstill in 2.9 seconds when in range-topping Performance form ($151,900 plus on-road costs).

Other Mach-E variants are available, with the choice of rear- and all-wheel drive on offer alongside standard- and extended-range lithium-ion batteries, rated at 75.7kWh and 98.8kWh respectively.

Charging times for the Mach-E vary depending on configuration, although the RWD version with the extended-range battery can add 52km of driving range per hour when plugged into an AC wallbox or about 76km in 10 minutes when using a 150kW DC fast charger.

Those interested in the GT and GT Performance Edition versions will have to wait until autumn in 2021, but in the interim a First Edition variant of the Mach-E with AWD and the extended-range battery will be available.

The Mach-E is available with three unique drive modes (Whisper, Engage and Unbridled), with “each offering finely tuned driving dynamics packaged with a distinct sensory experience”, according to Ford.

As reported, the Mach-E’s exterior design is inspired by its Mustang namesake, with its headlights, grille, bonnet, rear haunches and tail-lights clear shout-outs to current-generation pony car, while its fastback-style roof also pays homage while simultaneously capitalising on the increasing popularity of coupe-like SUVs.

Inside, the Mach-E is dominated by a portrait-orientated 15.5-inch touchscreen powered by Ford’s next-generation Sync infotainment system, which features artificial intelligence. A 10.2-inch digital instrument cluster is positioned ahead of the driver in a cabin that is otherwise not too far removed from that of the Tesla Model 3.

Behind the second row, 822L of cargo capacity is available, but this expands to a massive 1689L when all three rear seats are stowed. Want more space? There’s also a frunk with 139.5L of storage space, which is more than enough for charging cables, or as Ford suggests, an esky.

Measuring in at 4724mm long, 1880mm wide and 1600mm tall with a 2972mm wheelbase, the zero-emissions Mach-E shapes up as a mid-size SUV, with Mitsubishi’s Outlander PHEV the closest competitor it has in the mainstream segment.