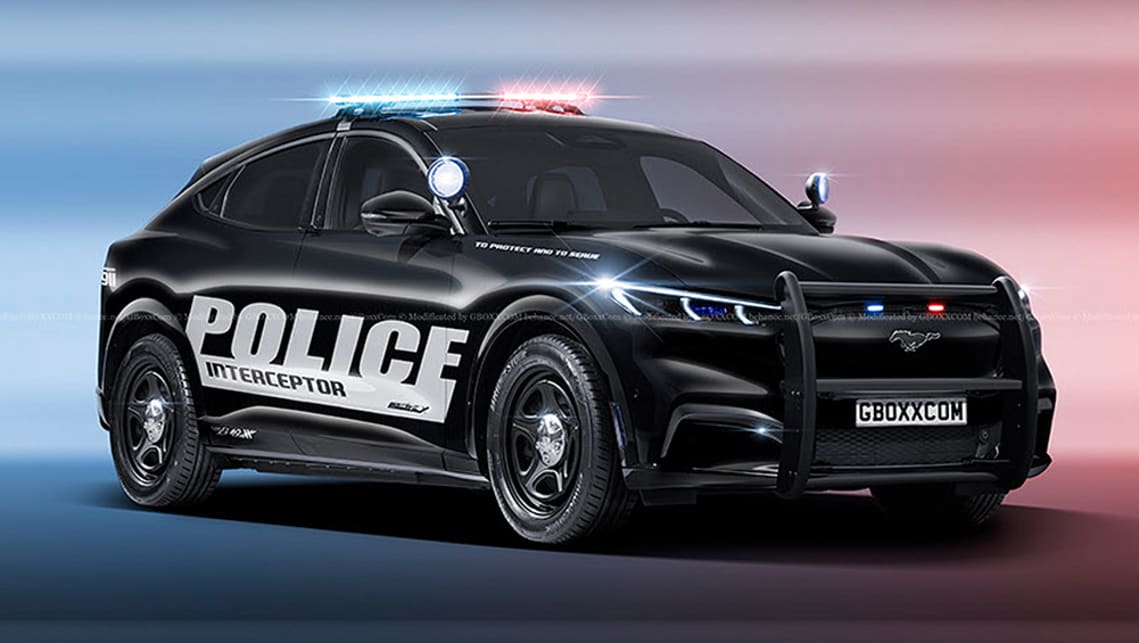 With fistfuls of grunt and a near silent motor, the all-electric Ford Mustang Mach-E could make a worthy Police Interceptor.

Decked out as a successor to the Ford Explorer used by cops in the United States, it’s not so hard to picture the zero-emissions SUV patrolling highways and chasing down suspects.

An artist by the name of Aksyonov Nikita at Behance.net is responsible for this set of renderings, adding classic black steelies, a big front bumper and most importantly, a special livery complete with “to protect and serve” on each bumper.

The electric powertrain generates 342kW and 830Nm, for a zero to 100km/h sprint time of around three seconds.

Of course, the Ford Mustang Mach-E Police Interceptor also includes an array of red and blue lights as well as mirror-mounted spotlights – as seen on TV.

The electric Mach-E has been met with significant criticism, mainly for its use of the ‘Mach’ moniker, though its performance prowess can not be denied.

In top spec form, the American SUV generates 342kW and 830Nm, for a zero to 100km/h sprint time of around three seconds.

The Ford Mustang Mach-E offers between 338km and 483km of driving range, depending on the variant.

The most efficient Mach-E variant should travel around 480 kilometres before running out of steam, while entry-level examples offer 338km of driving range.

Ford is already looking to electrification with its next fleet of police cars in the States, with hybrid Explorers now entering circulation.

The 2020 Police Interceptor Utility uses a 237kW/436Nm 3.3-litre V6 matched with a small electric motor, and mated to a 10-speed automatic transmission and an all-wheel-drive system as standard.