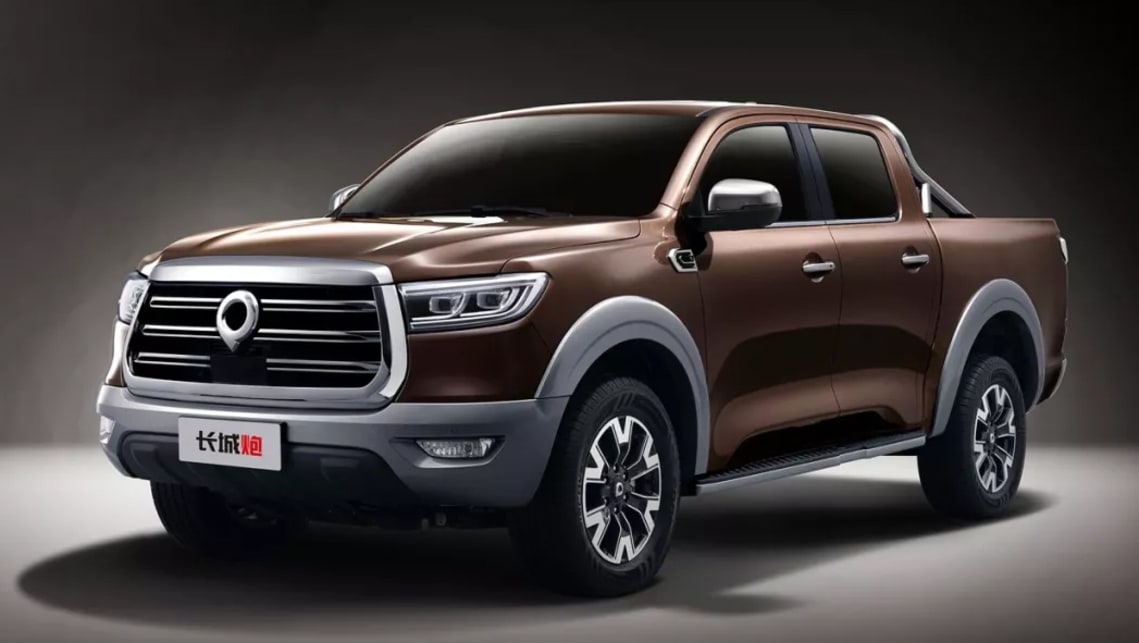 Called the Cannon, Great Wall‘s new dual-cab is described as a premium offering in China, but it has its sights set on Australia, too.

Based on the Chinese monolith’s new P71 underpinnings (which also underpins the Haval H9), the Great Wall Cannon will be offered as a dual-cab only, with plush touches ready for Australian consumers like a fully leather interior trim, keyless entry and push-start, LED headlights, a digital dashboard, a re-worked multimedia offering, and a more slick, almost Nissan Navara-esque body design.

Included on the spec sheet for the Chinese market is a vastly improved 9.0-inch multimedia touchscreen. The Cannon aims to bring a more premium look and feel to Great Wall’s ute range.

Mechanically, the Cannon sports a new 2.0-litre turbocharged petrol engine in its home market, able to make use of 140kW/360Nm, with full time four-wheel drive and an eight-speed ZF torque converter automatic transmission that’s made in China. A diesel engine is the most likely proposition for Australia, but whether that will be the current 2.0-litre turbo-diesel (110kW/310Nm) or an all-new engine is yet to be revealed.

The ute’s dimensions have also been revealed at 5410mm long, 1886mm wide and 1934mm tall, and its tray is measured at 1520x1520x538, theoretically giving it enough room for a standard Australian pallet depending on the wheel arches. Great Wall has said to CarsGuide in the past that this ute will target a minimum three-tonne towing capacity, and that its suspension will be tuned “with Australia in mind”.

“We have had a number of our engineers over here testing on a whole range of different surfaces, and that information has been fed back to head office to get the right suspension settings for our market,” says GWM spokesperson, Bill Soo.

“Especially things like our corrugations, which they’re not familiar with, and so we continue to work with head office on that. While it’s not a specific tune for Australia, it’s tuned with Australia in mind.”

Great Wall has studied established Japanese and American opponents in the hopes of developing a world-class ute offering.

The Cannon is part of a new branding strategy by Great Wall to try and ‘personalise’ its line of vehicles and set them apart from one another. Importantly, the Chinese brand says it wants to set its premium dual-cab offering apart from its range of workhorse equivalents.

According to Chinese media reports, Great Wall had studied branding strategies employed by Toyota and General Motors in the past in developing its multiple brand identities. The Cannon is part of Great Wall’s new ‘P’ series of trucks pitched as a luxury offering in its home market.

The Chinese giant has specifically targeted the Toyota Hilux and the Ford Ranger as the benchmark for the Cannon.

“They’ve done a lot benchmarking work on different models, and taken the best queues from them, but it’s also consistent with that American big-ute look that’s taking the world by storm,” a brand spokesperson told CarsGuide. “It was benchmarked against HiLux and Ranger for its off-road capability.”

Great Wall’s P Series will look to appeal to a broad range of market segments.

There is no word yet on the touted electric version which has previously promised a 500km driving range.

It is as yet unknown whether the Cannon will carry that name or branding when it arrives in Australia, but CarsGuide has reached out to Great Wall’s local operation for confirmation. Great Wall has earmarked a late 2020 release date for its next-generation ute in Australia.