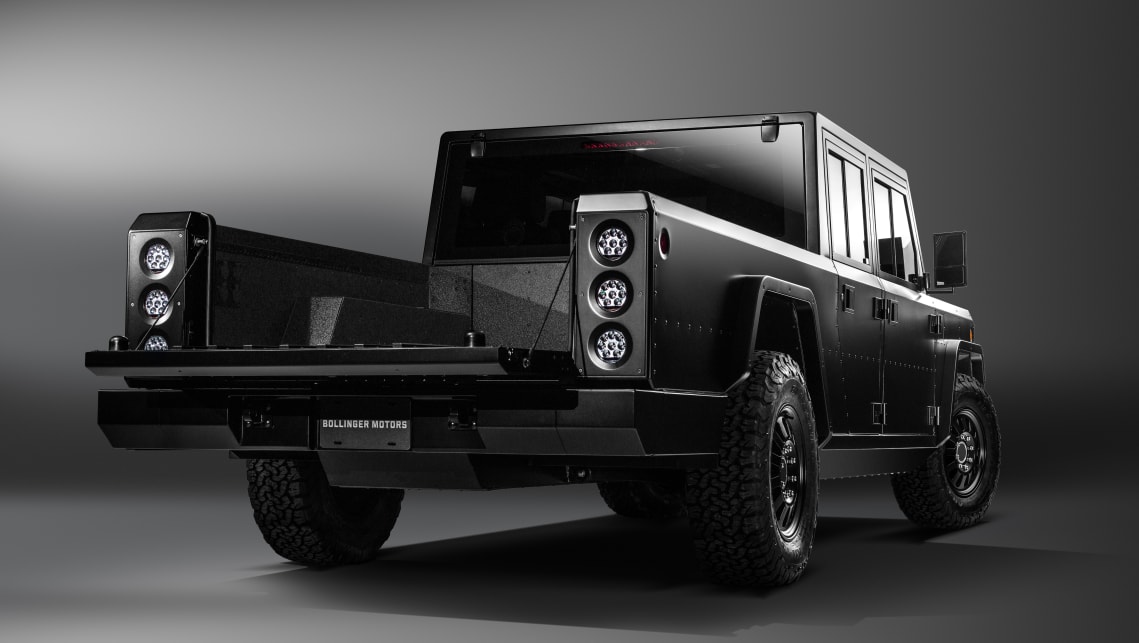 Bollinger B1 and B2 2020: Electric Land Rover Defender rival revealed

Bollinger – the US electric vehicle manufacturer out to “reinvent trucks” – has revealed production versions of its B1 SUV and B2 ute.

The off-road-focused duo are said to “take everything you love about a classic truck” and “make it an electric vehicle” and certainly share an aesthetic reminiscent of early Land Rovers and later Defenders.

The brand goes so far as to claim the B1 SUV is “the world’s most capable sport utility truck”. To back those claims, the B1 is powered by dual electric motors good for 458kW and 906Nm of torque.

The electric truck looks every part the tough off-roader it claims to be.

Power is sent to all four wheels via two-speed (high- and low-range) transmission. The B1 has a massive 120kWh battery pack providing a 322km range.

Bollinger says the B1 and B2 are constructed almost entirely of aluminium to keep the weight down, and subsequently boast massive load areas and a front trunk (or frunk) where the engine would normally reside in the bonnet.

Off-road credentials for the B1 include the two-speed ‘box, 15-inch ground clearance, 10-inch wheel travel, 52-degree approach angle, 43-degree departure angle and a 30-degree break-over angle. The modular design of the body means that the doors, roof, rear seats, and glass panels can all be ‘easily’ removed. The B1 has a 2268kg payload.

The Bollinger B1 sports some serious off-road credentials to back its big claims.

Meanwhile the B2 ute’s specs are slightly more limited, offering a 28-degree departure angle and 25-degree break-over angle thanks to the longer wheelbase.

While four-door versions of each body style will be available initially, Bollinger has said that two-door versions are also possible in the future.

Even the four-door version offers a massive tray and removable rear seats.

Don’t expect an Australian launch any time soon, with the Michigan-based manufacturer stating “we are prioritising the US market” for initial production of the B1 and B2, however it also confirms a RHD version is in the works.

Production might be the least of the truck’s worries for the Australian market, as it is not offered with airbags – an Australian Design Rules (ADR) requirement for new vehicles sold on our shores.

The interior is suitably rugged, but may throw up red flags for Australian regulators.

The unveiling did not include pricing, which is expected to be announced closer to the truck’s US launch.

The Bollinger model duo offers an even more hardcore alternative to the Ford and Amazon-backed EV off-road manufacturer, Rivian, which also aims to kick off its range with an off-road-focused SUV and pick-up truck.