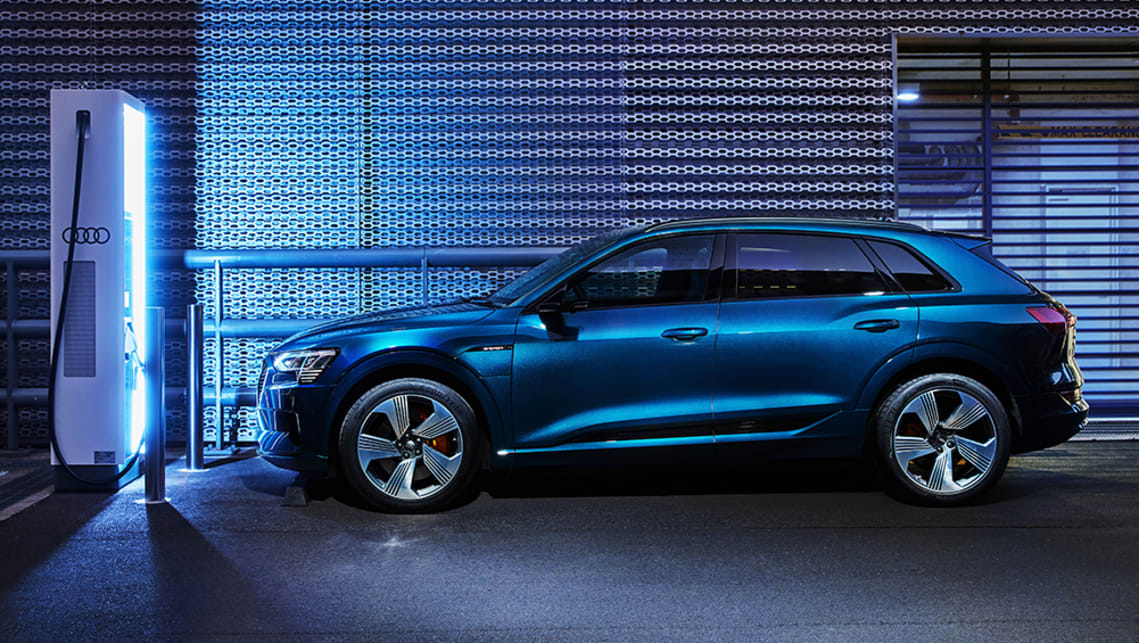 With Audi confirming pricing of its e-tron this week, it is clear that the German brand has its sights firmly set on the Mercedes-Benz EQC.

Audi also has Benz beat on variety, with a more stylish Sportback body style available that adds an $11,000 premium, as well as an up-spec 55 grade that adds more equipment and $9000 to the bottom line.

However, we’ll be comparing specs of the base e-tron 50 in wagon form as it is closest in price to the EQC 400.

Both vehicles boast two electric motors – one on each axle – for all-wheel-drive grip, with Audi’s e-tron 50 producing a combined output of 230kW/540Nm, compared with the 300kW/760Nm setup of the EQC 400.

As a result, the Benz is quicker to accelerate from zero to 100km/h, stopping the clock at 5.1 seconds compared with the Audi’s 6.8s time.

Both vehicles also sport a braked towing capacity of 1800kg.

Being electric cars though, performance might not be as important as driving range, and it’s in this instance that the EQC comes out on top again.

With its 80kWh battery in tow, the EQC400 will travel up to 353km of range when tested under the new WLTP standard.

The e-tron 50’s smaller 71kWh battery will still manage a commendable 336km of range, though the more expensive 55 version is available with a 95kWh battery and a 436km range in wagon form.

With the Wallbox installed or through an AC station, the EQC is able to charge from zero to 80 per cent capacity in just under 10 hours, but the e-tron 50 will recoup the same 80 per cent in just six hours.

The e-tron is also quicker to charge through a DC fast charger, taking less than 30 mins to get to 80 per cent compared with the Benz’s 39-minute time.

Buyers of the e-tron also score six years of free charging at Chargefox stations, while EQC buyers get five years.

It should also be noted that while the e-tron has adaptive air suspension on both axles, the EQC is fitted with steel springs up front and air suspension in the rear.

However, the EQC did score higher in adult occupant, child occupant and vulnerable road user protection tests with 96, 92 and 75 per cent respectively (compared with the e-tron’s 91, 88 and 71 per cent results), but the Audi scored higher in the safety assist examination (78% vs the EQC’s 76%).

There isn’t much to separate the e-tron and EQC on paper, with the former’s faster charging times matched by the latter’s slightly better driving range and performance.

It can be argued that the Benz also offers more value for money with much more equipment at a slightly higher pricetag, but the six-year free servicing and longer Chargefox subscription available to e-tron buyers also adds to its value equation.

We’ll reserve final judgment until we get behind the wheel of the e-tron on Australian soil, but regardless, we’re excited to see the all-electric premium SUV segment heating up.