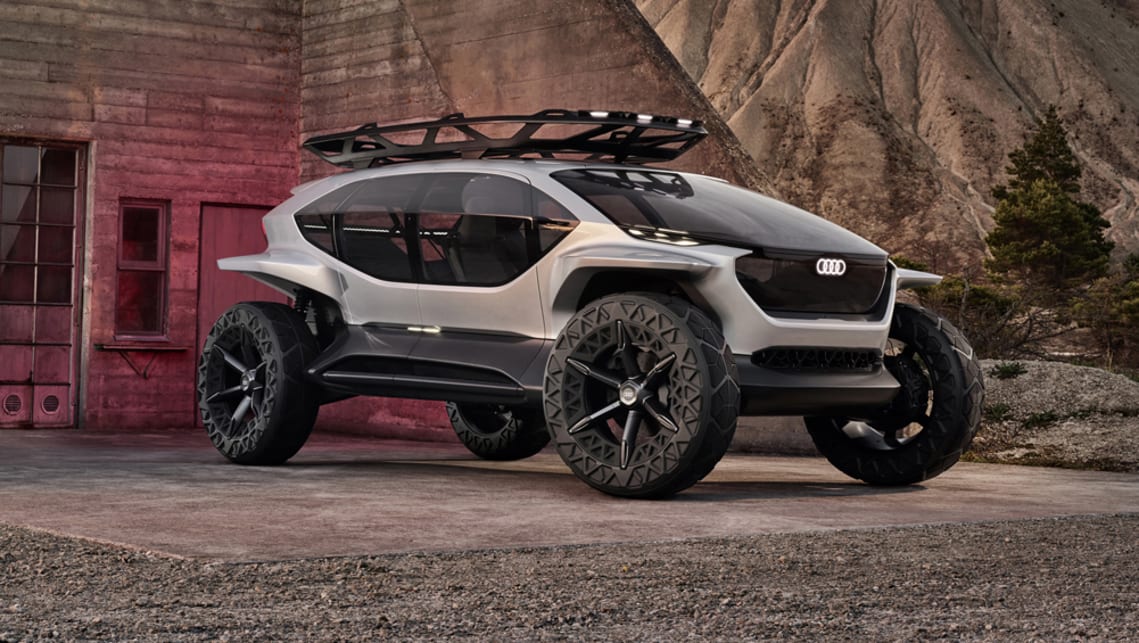 Audi AI: Trail quattro uncovered: Is this the future of off-roading SUVs?

Audi has lifted the lid on its AI: Trail quattro concept, the brand’s take on a cutting-edge SUV off-roader with an all-electric powertrain and autonomous driving capability.

Following from the already-revealed Aicon, AI:Me and AI:Race (a renamed PB18 e-tron) concepts, Audi’s latest show car focuses on exploring nature and getting off the beaten path thanks to a high-riding body and open glasshouse.

Equipped with Audi’s signature quattro all-wheel-drive system and four electric motors (one for each wheel), the AI: Trail features a total system output of 320kW and 1000Nm.

With a lithium-ion battery of undisclosed size fitted, the AI: Trail boasts a projected driving range of 400-500km on roads and easy off-road terrain.

However, on trickier and slipperier surfaces that require more energy to traverse, range is expected to drop to around 250km.

The all-electric powertrain isn’t the only technology that pushes the AI: Trail towards science fiction over reality though, as the concept also sports Level 4 self-driving capabilities.

While the autonomous systems can handle on-road situations, drivers will need to take control when venturing off the black top as “the way in which their surfaces frequently erode makes them too variable to allow their limits and any damage to be digitised for automated driving reliably and for any extended period,” according to Audi.

Instead, the cameras, lasers and radar used to underpin the self-driving systems can be fed to the driver when off-roading to help with obstacle traversing or tricky inclines/declines.

Artificial intelligence is also featured in Audi’s latest concept, which can learn from interactions with passengers to become a better digital assistant.

The most sci-fi feature of all however, is likely the use of five automated drones in lieu of headlights, which can fly ahead and illuminate terrain.

The drones can be wirelessly charged when docked to the vehicle and can also be positioned on the roof racks for use as a floodlight.

Externally, the AI: Trail concept looks closer to a space exploration vehicle than a conventional SUV, and measures 4150mm long, 2150mm wide, 1670mm tall and has a wheelbase shorter than the new Q3 crossover.

Wheels measure 22 inches in diameter and are shod in 850mm rubber which, when combined with the 340mm ground clearance, means the AI: Trail can cross water nearly 50cm deep.

Meanwhile, the passenger cabin is designed for maximum visibility with glass for the roof, Singleframe front grille and rear spoiler, while storage compartment for dirty items can be found in the rear bumper.