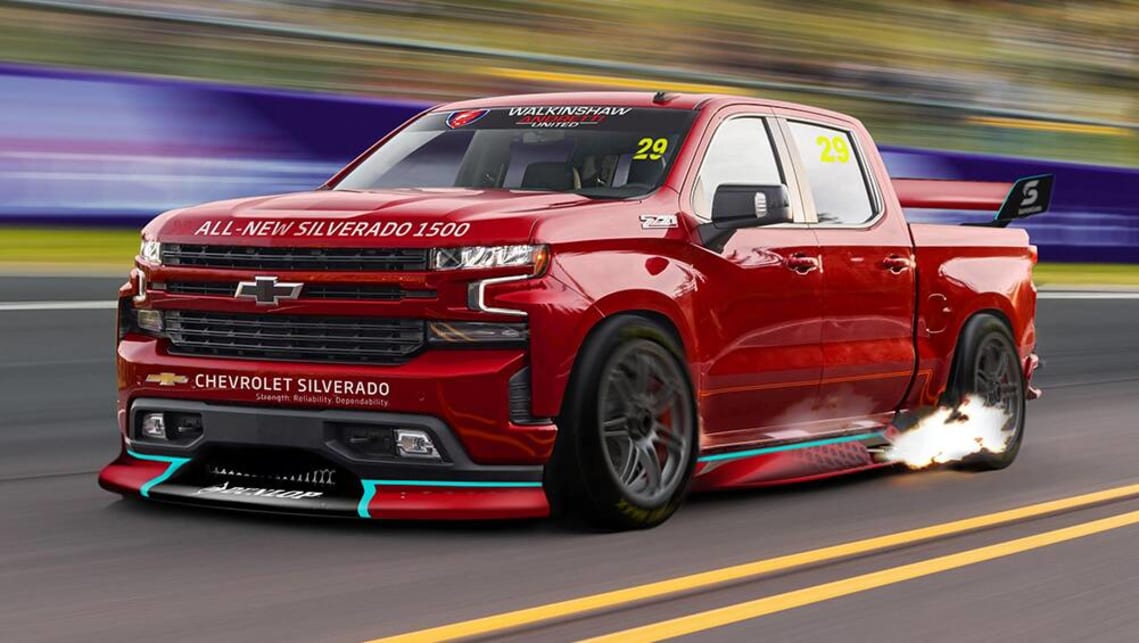 Are utes the future of Supercars after Holden disappears?

Holden and motor racing go hand-in-hand in this country.

Peter Brock, Mark Skaife and Craig Lowndes are as synonymous with the Lion brand as the Monaro, Torana and Commodore nameplates, which is why General Motors’ decision to kill the Holden brand has sent shockwaves through the Supercars racing community.

This weekend the series is getting underway on the streets of Adelaide, but what should be a time of excitement is instead one of great doubt. It’s fair to say touring car racing in this country has never faced the kind of uncertainty it must deal with now.

Since the 1960s touring car racing has relied on the Holden vs Ford rivalry, but with Holden gone, how will it survive? Can General Motors step into the breach? Does it even want to? And if not, who will line-up alongside Ford on the Supercars grid in 2022 and beyond?

Let’s try and answer all of those questions.

Obviously, there are no questions about 2020, with the season now underway teams are already committed to their respective vehicles for the year. So, the question becomes what will happen to the teams Holden currently supports, primarily the Red Bull Holden Racing Team (RBHRT).

The two parties have a contract that runs through to the end of the 2021 season. RBHRT boss Roland Dane met with the media in the immediate aftermath of Holden’s announcement and said he would sit down and meet with the management team to work out a plan for next year.

The most likely outcome is Holden will pay-out the remaining year of its contract, which is likely to be a small amount in the grand scheme of the $US1 billion bill GM is facing to wind up the company and pull out of all right-hand-drive markets including Thailand and New Zealand.

From a racing team point of you, it’s likely every single Holden team in pitlane will have placed a call to Ford by now to see if they’d help them swap to a Mustang for ‘21. But they’ll probably end up racing their Commodores for at least another year, and possibly longer if no new manufacturer’s join the sport. Don’t forget, the Ford Falcon won the Supercars Championship in 2018 after shuttering production at Broadmeadows in 2016.

What now for Supercars?

Supercars Australia CEO Sean Seamer faces an incredibly difficult few months as he tries to come up with a plan to save the sport. The category was aiming to introduce its ‘Gen3’ regulations for the 2022 season, which it hopes will encourage more manufacturer involvement.

With Holden gone, Mr Seamer admits that those Gen3 rules – or at least elements of them – could be introduced in 2021 to help find a replacement for the Commodore.

“Whilst this news [about Holden] is a surprise, it doesn’t change our plans,” Mr Seamer told CarsGuide. “We’re going through a process, chatting with our stakeholders, including manufacturers, including GM, about what next year looks like. We’ll make a decision in the next few weeks what those plans of 2022 we want to pull forward into 2021.”

Will General Motors race something else?

The sudden departure of Holden may accelerate the Gen3 plans, with many within the industry optimistic that the Chevrolet Camaro can be drafted in as a replacement for the Commodore.

Speaking at the announcement of Holden’s closure, both GM International chief Julian Blissett and Holden chairman Kristian Aquilina spoke of plans for a GM Specialty Vehicles business that could be set-up to sell limited numbers of niche models – like the Camaro and Corvette.

Holden Special Vehicles already runs a similar program, importing and converting the Camaro in Melbourne. That company is owned by Ryan Walkinshaw, who also runs the Walkinshaw Andretti United Supercars team. He has previously talked of his interest in racing the Camaro but has been blocked by the regulations.

The expectation is that Gen3 will alter the rules to allow the Camaro in. But that puts a lot of pressure on a relatively small business to fill a very big hole left by Holden. But with support from Supercars, it’s highly possible that the Camaro could be on the grid in 2021.

What is highly unlikely to ever be in a Supercars starting line-up is the Corvette. Even if GM continues with its plans to sell it in Australia (likely through HSV dealers), Mr Seamer ruled out allowing the now mid-engined sports car into the sport. He believes trying to find competitive balance between the front-engined Mustang and mid-mounted Corvette would simply be too hard, as well as too far removed from the touring car concept that underpins the sport.

Who else could replace Holden?

Despite ruling out the Corvette, Mr Seamer is in favour of allowing more two-door sports coupes into the category, beyond the Camaro. The plan is for Gen3 to allow the likes of the Nissan GT-R, Audi RS5 Coupe, BMW M4, Mercedes-AMG C63, Lexus RC F and even Jaguar F-Type into the sport.

Whether any of those brands are interested remains the biggest question mark.

“The days of manufacturer’s pouring millions into motorsport are gone, they’ve been gone for a long time,” Mr Seamer admitted. “The interest and the engagement we have with manufacturers and their involvement is about understanding what their product roadmaps are, what they believe is going to be relevant to consumers in the future, and therefore how do those plans then inform the decision we’re going to make as a category. It doesn’t mean we’re going to necessarily follow all of them, but that’s at the core of the discussions we’re having with manufacturers at this point in time and will do into the future.

“The premise of Supercars is it’s a visceral, in-your-face experience. Whilst I’m not going to get into terms of speculating things are going to look like next year of the year after, it will be loud, in-your-face and be the closest and best racing on the planet. That’s the core of what we do, irrespective of the badge on the front of the car.”

Carmakers are increasingly looking towards an electric future, either with fully-electric vehicles or plug-in hybrids. In that context Supercars and their pushrod V8 engines seem antiquated, but it’s what the fans love and it makes for loud, exciting racing.

But even the most hardened V8 lovers at NASCAR are considering adopting hybrid assistance in the near future, so the world is changing. Which means Supercars must consider the possibility of the same eventually.

X-Trac, the company that supplies the transmissions for every Supercar, are reportedly in talks with several categories around the world about implementing a single-specification hybrid system. Those categories include the NASCAR, the US IMSA sportscar championship as well as the British Touring Car Championship and others.

But Mr Seamer stressed Supercars wouldn’t lead the way and would instead be a “fast follower” of adopting hybrid powertrains when the time is right.

What about doing something different?

The recent growth of GT racing in Australia, headlined by the Bathurst 12-hour, has led to some calls for GT3-specification cars to replace the current Supercar vehicles. After all, the big brands Supercars wants to attract – Audi, BMW, Mercedes-AMG, Porsche, etc. – are already involved.

There are two major problems with that theory. Firstly, the GT3 cars are too expensive, costing more than $500,000 for some and close to $1 million for others. Secondly, they don’t race very well, not in the same door-to-door way we’re accustomed to with touring cars.

But there is an alternative that would allow for the V8 engines to continue, cater to a wide audience of manufacturers and correspond with what many Australian’s have parked in their driveway – Utes.

Are dual-cab utes the answer?

While it may sound like a radical idea at first, think through the possibilities that switching to a series based around dual-cab utes offers Supercars Australia. The history of touring car racing is largely built around the cars Australians drive – Commodores, Falcons, Toranas, etc. – and at this point in time we love our dual-cab utes. The Toyota HiLux and Ford Ranger are the most popular new vehicles in the country and have been for several years.

Switching to a series for utes would open the category to several major brands including Mitsubishi, Nissan, Mazda, Isuzu, Volkswagen, Ram, Chevrolet, Great Wall, LDV and, eventually, Hyundai and Kia (when their new dual-cab arrives in a few years).

Of course, not all of those brands would jump in but to entice even two or three would be a major boost for the category.

As our computer-generated image of a possible Chevrolet Silverado 1500 Supercar (or should that be SuperUte or SuperTruck?) demonstrates, these popular load-luggers could be turned into something that looks suitably racey.

They would meet all the criteria Supercars is looking for with its Gen3 rules – less downforce for better racing, V8 engines, manufacturer interest and consumer relevance – plus it would give the category a fresh start with a new identity in the post-Holden era.

Mr Seamer is open to Utes competing but his clear preference is sports coupes.

“I think the Gen3 regulations would allow for that if someone decided they want to do it,” he said. “We’re looking to pull a lot of downforce off the car, get back to road car DNA as much as possible, which would mean that if we don’t have as much reliance on aerodynamics then it does open the category up to a wider range of body shapes. Could it be a ute? Could it be a van? A lot of people like to kick around ideas, but where we’re at right now in the planning process, and the manufacturers we’re speaking to, we see longevity in two-door sports cars in a range of shapes and sizes, that we believe to be aspirational – something kids would look up to, but also obtainable for their dads.”

Regardless of which path Supercars goes down, without Holden the sport will never be the same again.